A metal detectorist has made an incredibly rare treasure find, this time a rare Roman brooch has been rescued from a Lincolnshire field.

The 48 year old was searching in a field when he unearthed what he thought was a lump of scrap metal, as he started to wipe the dirt away he could see it was indeed a colourful Roman horse brooch.
Experts believe this Roman artefact will help discover more about the Romans in the area.

Roman brooches are not uncommon if you are metal detecting on the right site, for example a place of Roman worship or a communal gathering.
Here are some interesting facts about Roman Brooches, also known as Fibilae’s.

Most fibulae are made of bronze , some were made from Silver and Gold, but did you know many were made from Iron, so keep that in mind when you are turning your metal detector discrimination up. 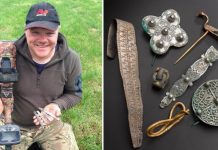